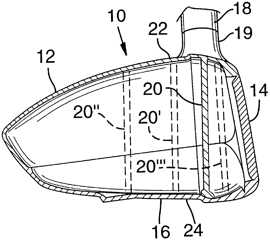 The DoubleWall™ is an exciting new golf club technology introduced in 2004 after six years of development and testing.

The DoubleWall is engineered with a patented interior wall design creating a power chamber that strengthens and stabilizes the entire hitting structure of the golf club.

The result is your off-center hits perform almost as well as your dead-center hits, particularly when compared to competitors’ golf clubs that use thin face technology.

Independent lab test verify the DoubleWall’s claims are true. After seeing the results, the President of the independent testing lab chose the DoubleWall for his own personal use. It is that good!

The DoubleWall™ is available as a titanium driver in several lofts and is USGA legal. Fairway woods are available in maraging metal.

In mid-1998, our golf design professionals believed an inner wall could improve the performance of a golf club — improving the structural integrity of the golf club, increasing ball velocity off the striking face while also improving forgiveness by creating a more stable sweet spot.

Our development team hypothesized the inner Power Chamber might just cure a longstanding problem in today’s metal wood designs. In order to optimize perimeter weighting and low center of gravity, club heads are not cast the same thickness throughout. Specifically, the striking face is 2.3–3.4 millimeters thick; the sole plate (bottom) of the club is slightly thinner, but much more variable in thickness; and, the entire top shell of the golf head is very thin—less than 1.5 millimeters in many spots. That is why a poorly “top-hit” golf shot can dent or “cave-in” the top of a hi-tech driver.

So, the top of the golf club head is the weak spot and this weak spot also has a significant effect on performance. The top of the club has much more “give” than the bottom of the club. And, with the extremely high impact forces caused by striking the golf ball, compression of the club head naturally occurs. Our design group reasoned that our new construction would reduce the flexibility of the top metal and significantly improve the structural integrity of the club head. This should increase rebound and increase ball velocity off the striking face. Only prototyping and testing would tell whether our team was right.

From 1998 through 2002, the DoubleWall continuously evolved through hundreds of prototypes and independent laboratory testing. The development process was very straightforward. Prototype DoubleWall drivers were created, each with an inner wall. Each prototype had the interior wall positioned at a different place within the club head. Those prototypes were then independently tested at BioMechanica Laboratory in Portland, Oregon. Martin Shorten, PhD, BioMechanica’s founder and president, just happens to have developed one of the most popular golf testing cannons used by most major golf manufacturers for destruction and performance testing. Dr. Shorten also designed much of Nike’s Air Sole technology, designed the new concussion resistant football helmet recently announced to the world, and is one of the world’s top experts in impact physics and impact performance measurement.

Through BioMechanica’s testing, it was determined the concept worked. Lab tests verified that performance was significantly improved. When compared to published test results by the major brands in leading publications, the DoubleWall outperformed all other golf clubs which were showing their results to the public.

In May, 2002 the US Patent Office concluded the DoubleWall technology represented a unique invention that enhanced utility or performance. The DoubleWall golf club head deserved a Utility Patent and was granted US Patent number US006383090B1.

Right smack in the middle of all this, the USGA came down on “spring effect” drivers. Our design engineers knew all about the technology of trampoline effect drivers, because this technology was counter to our idea. We weren’t worried about the spring test because the DoubleWall was specifically designed to reduce spring and thereby increase velocity.

However, in reality the USGA put into place a speed limit on all drivers. USGA Rule 4-1(e) as regulated by USGA Rules Appendix II 5(a) states, “The material and construction of, or any treatment to, the face or club head shall not have the effect at impact of a spring, or impart significantly more spin to the ball than a standard steel face, or have any other effect which would unduly influence the movement of the ball.” When thin face technology came about a few years ago, it was deemed by the USGA that thin face technology constituted a spring or moving part within the striking face, and thereby violated the Rule 4 of the USGA Rules of Golf.

To test for that movement the USGA introduced the COR test. This test does not test for the movement of the striking face; it just tests for velocity of the ball off the club face. The USGA then deems illegal any club that does not pass this specific test. So, while the DoubleWall™ clearly is not of the spring-like design employed by several major manufacturers, it is subject to the USGA Speed Limit.

This created a problem for us, because DoubleWall’s performance easily exceeded the Speed Limit, while not using the moving striking face (a.k.a. thin-face) technology that others use to break Rule 4-1(e). So, much of 2002-03 was spent “dumbing down” the performance of the DoubleWall to come in under the Speed Limit and build a USGA legal golf club. We have achieved this goal in late 2003.

BioMechanica’s independent lab tests showed some extremely interesting results. Because the Power Chamber in the DoubleWall creates a more stable striking face, all of the independent testing lab results showed the DoubleWall had a much smaller standard deviation of COR for off-center hits than any club it was tested against. And the differences were significant. That is what BioMechanica’s test reports showed us. We were thrilled, because all of that technical jargon translates as - a Bigger, Fatter Sweet Spot!

Now, not only does the DoubleWall play at the edge of the legal speed limits, it does so more consistently throughout the face area of the club head. This is a very big deal for those golfers who don’t always hit the ball dead solid perfect. And you know who those guys are—pretty much everybody!